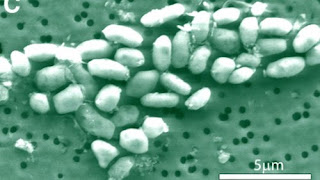 GFAJ-1
Remember how I always say all life on Earth makes DNA the same way? That life builds DNA with a backbone of sugar and phosphate? Well, not anymore. Nasa Scientist Felisa Wolfe Simon and her team of researchers have discovered a bacterium that does not build its DNA with phosphate, but uses Arsenic instead!!

The organism was discovered in Mono Lake here in California. This bacteria, called GFAJ-1 can eat arsenic, but so can a few other bacteria. What makes this bacteria so unusual is that it makes its DNA from it!

Arsenic is very toxic to most of us, but this single celled organism has found a way to make DNA, RNA, proteins and even its cell membranes from it.


To read the press release from NASA click here
Posted by Connie at 1:36 PM No comments:

Bio 120 review for the final

1. Define resource partitioning and give an example of it.

10. What is carrying capacity?

1. How is a genotype different from a phenotype?
2. What name is given to each of the following genotypes: TT Tt tt
3. Which of Mendel's laws discusses the separation of alleles in meiosis?
4. Which of his laws would describe the behavior of human chromosome 2 and 13 during meiosis?
5. In peas, tall is dominant over short. If two plants tall heterozygous plants were crossed, what proportion of the offspring would you expect to be short?
6. In one breed of chickens feather color is black, blue-gray, or white. How is feather color inherited and why do you think so?
7. If mom has 0 blood, and dad has AB blood, what proportion of the children will have B blood?
Posted by Connie at 12:59 PM No comments: