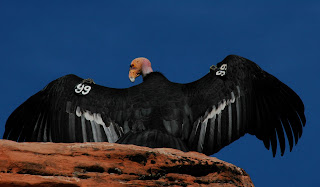 There are few species that were or are more endangered than the California Condor (Gymnogyps californianus). When they were taken in from the wild as part of a captive breeding program in the 1980s there were only 22 birds left alive. They were bred in captivity and then released back into the wild beginning in 1992. Today there are 369 birds alive with 191 in the wild as of March of 2011. They are now found in Arizona, California, Baja, and Utah. I was lucky enough two of these birds when hiking the Angels Landing Trail in Zion National Park. 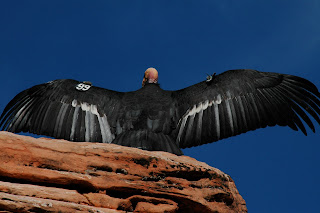 Condors are huge birds. They have a 9 foot wingspan and weigh up to 25 lbs. They can fly 100 miles a day in search of food, and glide at speeds up to 50 miles per hour. They are scavengers and eat dead deer, cattle and other large animals. This is one of the reasons they became endangered. As they ate the carcasses of hunted animals they ingested lead ammunition used to kill the animal by hunters. Many developed lead poisoning. The bird in the picture above, number 99 had to be captured recently and treated for lead poisoning before being re-released.
I took these photos with a 300mm telephoto lens. It is very important not to approach any wild animal too closely. It just is not a good thing for wild animals to get too used to humans. Condors are curious birds, and that has also caused them problems as they visit areas like campsites humans have purposely harmed them.
The Angels Landing Trail is a very steep trail and very narrow in places with long drop offs as one climbs up the cliff sides. Just the kind of area condors like to use for nesting. 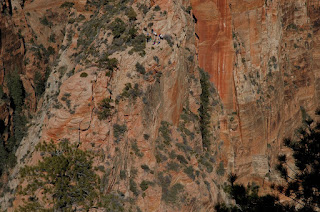 Can you see the people in this photo? They are below the last part of the trail, but where is the trail? 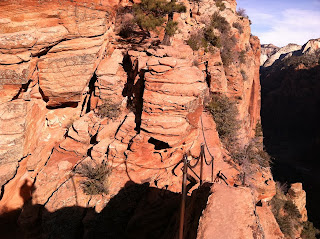 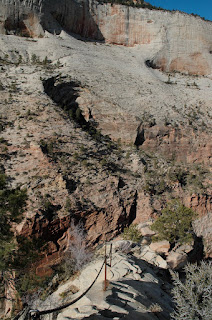 The last one half of a mile is up this trail and has a 500 foot elevation gain. 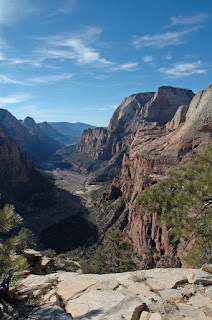 The view from the top makes all the work worthwhile, and seeing the condors was a huge added bonus. 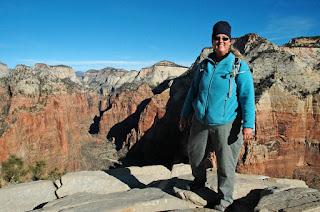 Posted by Connie at 2:46 PM No comments: