1. To which group of mammals do you belong, and how are you different from a monotreme?
2. Birds are part of the reptile clade, yet they are highly modified for flight. What are 3 adaptations they have to facilitate flight?
3. What makes a bird a bird?
4. How are reptiles better adapted for land than the amphibians?
5. Why do amphibians need to keep their skin moist?
6. Bony fish have some characteristics that the cartilaginous fish lack. What are these features and how are they a benefit to the bony fish?
7. What is present in the fins of the lobed finned fish?
8. How is a marsupial different from a monotreme?
9. What marsupial is found in the US?
10 Which group of chordates have the chordate characteristics as larvae, but retain the pharyngeal slits as adults?
Posted by Connie at 1:45 PM No comments:

Thanks to all of my students who spent several hours Saturday helping to restore the Bolsa Chica Mesa by weeding non-native plants and watering the natives we planted earlier in the season. As part of the walk afterward you may have heard about endangered species that nest at Bolsa Chica. The Land Trust has just installed a webcam at one of the nesting sites for these endangered birds. Right now the nest cam is on the nest of a western snowy plover. The Department of Fish and Wildlife places wire boxes over the nest site to protect them from predators like crows. The snowy plover can still get to and from its nest, but crows and other predators are too big to fit through the wire mesh and get to the eggs. Due to heatwaves, the images from the nest cam are best in the morning. Click here to go the Bolsa Chica Land Trust's website where you can select the device you wish to use to see the nest cam. You can choose from a mobile device or desktop computer. 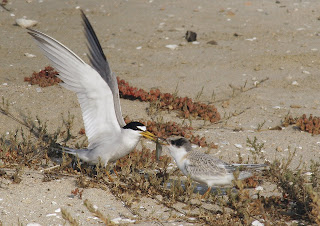 This is a California least tern which is also an endangered species that uses the nest sites at Bolsa Chica
Posted by Connie at 1:38 PM No comments:

9. During early development of an animal the first opening that forms becomes its mouth. This animal is A. a protostome
B. a deuterostome
C. an endotherm
D. a bird
10. Jellyfish have a body form called a _______ .
11. How are the three groups of worms we have discussed different?
12. What characteristics do all Mollusks share?
13. What features of the Arthropods contribute to this group being the most successful group of animals? 14. What do all Arthropods share in common?
15. How are the Echinoderms different from the other invertebrate animals?
16. What are the characteristics of your Phylum?
17. Why are tunicates in our Phylum?
Posted by Connie at 9:14 PM No comments:

1. Which colors of light are most strongly absorbed by chlorophyll?

2. How is oxygen released during photosynthesis?

3. Why is water needed in photosynthesis?

4. What are the products of the light dependent reactions?

5. What is made in the light independent reactions?

6. What is the role of RUBP in photosynthesis?

7. What kind of plants use PEP and what advantage does it give them?

8. How are CAM plants different from others in the way they do photosynthesis?

9. What kind of organisms can do photosynthesis?

10. Where inside the chloroplast do the light dependent reactions happen?

Here's some questions to make those brain cells churn out the ATP!

1. What are the differences between aerobic and anaerobic respiration, and which is more efficient?

3. What are the three steps in aerobic respiration, and where does each occur?

4. During which step of cellular respiration is the most ATP made?

5. During aerobic respiration, how many ATPs are made from one molecule of glucose in most cells?

6. What is the role of oxygen in aerobic respiration?

7. Describe how the ATP is made during chemiosmosis

8. What is produced by your muscle cells if there is not enough oxygen available at the end of glycolysis for aerobic respiration to continue?

10. What are the important end products of the Citric Acid Cycle, and what happens to each of these products?

9. During early development of an animal the first opening that forms becomes its mouth. This animal is A. a protostome
B. a deuterostome
C. an endotherm
D. a bird
10. Jellyfish have a body form called a _______ .
11. How are the three groups of worms we have discussed different? 12. What characteristics do all Mollusks share? 13. What features of the Arthropods contribute to this group being the most successful group of animals? 14. What do all Arthropods share in common? 15. How are the Echinoderms different from the other invertebrate animals? 16. What are the characteristics of your Phylum? 17. Why are tunicates in our Phylum?
Posted by Connie at 9:12 PM No comments:

Algae
1. Why are algae not plants?
2. What is one main characteristic used to classify algae?
3. How are diatoms different from other algae?
4. What do these terms mean: autotroph, heterotroph, mixotroph
5. What commerical products do we get from algae?
6. What kind of algae causes red tides, and how can red tides affect other organisms?
7. What kind of algae can disrupt ecosystems in the Pacific?
8. What is the function of the stipe, holdfast, and blade?
9. How is Volvox different from Chlamydomonas?
10. What is the name of the primary photosynthetic pigment in red algae?
11. Do algae make gametes?
12. What are zygospores?
Posted by Connie at 3:33 PM No comments:

14. How can adaptive radiation happen?


Bacteria
1. What is the name of the bacteria that do photosynthesis,and what can they do in addition to photosynthesis?
2. In what major way are bacterial cells different from plant cells?
3. Describe how bacterial cells can reproduce.
4. What is in the cell walls of bacteria?
5. What is a capsule used for?
6. What are the three basic shapes of bacteria?
7. What roles do bacteria play in the ecosystem where they are found?
8. How are Archea different from bacteria?
9. Some bacteria live in the roots of plants. What are they doing there?
10. What is a plasmid?


Fungi Questions
1. How are fungi classified?
2. What role do fungi play typically in their habitat?
3. How are fungi different from plants?
4. How do fungi feed?
5. What does heterokaryotic mean?
6. How do fungi spread out in their habitat?
7. The body of a fungus is a thread like structure called a ____
8. A mass of the answer in question 7 is call a ____
9. A lichen is made of a ____ and a ____. What is the ecological role of lichens?