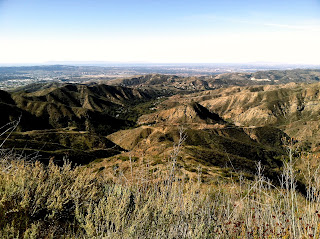 I take my Botany and Bio 200 students a little way up into the hills above Tucker Wildlife Sanctuary in Modjeska Canyon, but today I walked up to an elevation 3,800 feet on the Harding Truck Trail, and could see Catalina Island, San Clemente Island, and San Nicholas. I could also see islands south of San Clemente. What a great day for a hike.
Posted by Connie at 7:50 PM No comments:

Octopus explores land on way to a different tide pool

Octopuses are most likely the most intelligent invertebrate animal, and notoriously hard to keep in aquarium tanks. With their soft bodies they can squeeze through openings as small as their hardest part, which is their modified radula (called a beak) with which they feed.
This video shows how dexterous they can be on land.
Posted by Connie at 11:57 AM No comments:

Last week in lab we looked at hagfish as an example of a primitive chordate.
New Scientist has an article with a great photo of the hagfish and a video of them repelling other fish. Another common name for the hagfish is "slime eel". Watch what happens when fish come up and bite the hagfish.
Zoologger: Slime killer hagfish feasts in rotten flesh - life - 27 October 2011 - New Scientist
Posted by Connie at 9:50 AM No comments:

Evolution Review
1. How do biologists define evolution?
2. What is a population?
3. What islands were important to Charles Darwin's thinking on evolution?
4. Biogeography is how living things are distributed around the world. How was Darwin surprised by the the biogeography he observed on his trip around the world?
5. While fossils support the theory of evolution, we can't rely on the fossil record ever being complete. Why?
6. How does the existence of fossils support the theory of evolution?
7. How did LaMarck explain inheritance?
8. What was the hypothesis of catastrophism?
9. While the theory of evolution does not indicate humans came from chimps, it does indicate a _________________________ between chimps and humans.
10. Upon what observations did Darwin base his theory of evolution by natural selection?
11. How can speciation happen?
12. What mechanisms drive evolution?
Population Ecology and Interactions
1. Define resource partitioning and give an example of it.
2. How is a parasite different from a parasitoid?
3. How is a parasite different from a predator?
4. How are density dependent limiting factors different from density independent limiting factors? Give examples of each.
5. Coevolution happens also between parasites and their hosts. Why is this not surprising?
6. Define and give examples of the following: Mutualism, Commensalism, social parasite.
7. What are common strategies predators use to capture prey, and common defenses found in prey?
8. Draw a food web that could occur in your backyard or here at Cerritos. Include all the trophic levels we discussed in class.
9. Why are there fewer members of the upper trophic levels as compared with primary consumers or the producers?
10. What is carrying capacity?
Posted by Connie at 8:46 AM No comments: 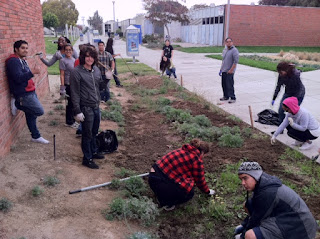 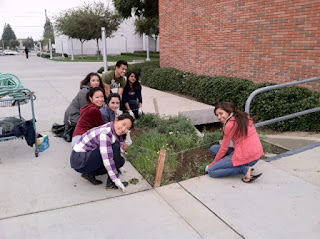 Thanks to my Bio 200 students for helping to weed and then plant wildflower seeds Friday afternoon after class. Watch for new growth and blooms early in the next semester.
Posted by Connie at 4:42 PM No comments: 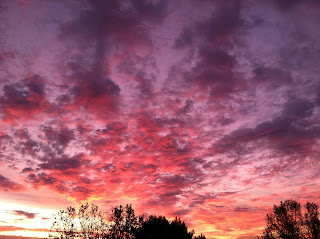 Posted by Connie at 8:09 PM No comments: