Thanks to the students from my class, the Wilderness Club, and the Environmental Club from Cerritos College for coming out to Bolsa Chica on Saturday for the Bolsa Chica Land Trust's workday.
Here's a photo of some of the students showing off their hard working hands. 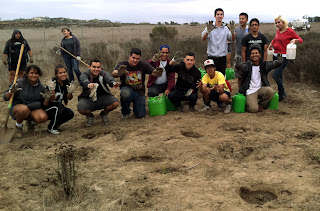 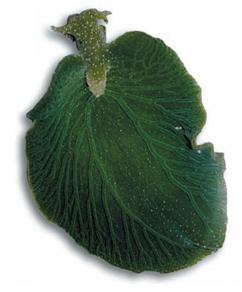 I mentioned this animal in class on when we were discussing photosynthesis.

This beautiful green leafy organism is actually a sea slug. The sea slug Elysia chlorotica consumes chloroplasts when it eats the algae Vaucheria litorea. The slug feeds on the algae, but the chloroplasts are retained in the cells of the gut. The gut in this sea slug is highly branched and the chloroplasts give it the green color. The chloroplasts in the tissue of the animal's gut continue to function in the animals without an algal cell being present. The slug lives about 10 months and can survive off the food made by the chloroplasts.

The green color also provides great camouflage. While the animal has to eat an algae to get the chloroplasts, it is intriguing that the chloroplasts can continue to function without any algal cells present as genes in the nucleus of the algae are needed for photosynthesis to occur. So where are the genes to support photosynthesis? In the nucleus of the sea slug cells! The slug gets the genes from the algae, it does not have them until the animal feeds on the algae.

Interested in looking into this gene transfer further? Click here to read a paper by Mary E. Rumpho et al. on horizontal gene transfer between the algae and the slug.
Posted by Connie at 10:27 PM No comments:


I am disappointed to have to report that the Coastal Commission approved the plan by Shea Homes for 111 more houses in the Upper Bolsa Chica Wetlands along Graham.  Commissioner Sanchez and Wickett voted no.

Commissioner Sanchez spoke eloquently about the lack of analysis of cumulative impacts, as well as the fact that the flood control feature included in the plans violates the LCP and Coastal Act.

I found it ironic that the spokesman for Shea played up the fact that the wetlands on the property have increased from 1 acre when the Huntington Beach City Council approved the project (4-3) in 2002, to the 13 acres today. Folks, Shea did not do this out of the goodness of its heart, Shea did this because of the members of the Bolsa Chica Land Trust. The Land Trust and the analysis by the Bixbys in particular, provided evidence of additional wetlands on the site. The actions of the BCLT reduced this project size by one third, and that is something I am very proud of.
Posted by Connie at 4:41 PM No comments:

Take a break from your studying and check out this video of a spider that is being called the "Peacock Spider". It was discovered in Western Australia. The camera work is great. Click here to see the spider.
You will see a little after one minute into the video why the spider is called the peacock spider.
Posted by Connie at 5:43 PM No comments:

2. What is the function of the anther in the flower?

3. Which of the following is where one would find ovules?

A. in an anther
B. in the ovary
C. in the stigma
D. in the style

5. In double fertilization the first sperm fertilizes the egg and the second

6. What is the function of fruit?

7. Microspores become
A. the embryo sac
B. the mature male gametophyte
C. pollen grains
D. eggs E. only B and C above

8. What is the oldest plant on Earth, and what is the most massive
9. How are confiers adapted to life in cold dry climates?

NPR has been running a series on their news program Morning Edition about genetic sequencing and how it can be medically useful, as well as present problems for us. You can read a transcript, or listen to the show here
Posted by Connie at 11:42 PM No comments:

1. Describe the structure of the DNA molecule

3. During DNA replication, what enzyme breaks the hydrogen bonds between the base pairs, and what enzyme matches up nucleotides to the existing ones on the parent strand of DNA?

4. Why is this type of replication called Semi Conservative?

5. How is RNA different from DNA?

7. mRNA gets a cap and a tail prior to being read by the ribosome. What is the function of the cap and tail?

8. If the DNA strand being copied had this sequence: ACT GGC ATA CTA what would the sequence of the mRNA be?

9. The function of transfer RNA is ?

10. What is the name of the enzyme that produces RNA from DNA?

11. If the sequence of DNA is the same in your body cells, why are all cells not the same?

12. The DNA in you, an earthworm, and a fungus is the same. So why are you a human and not an earthworm?

13. What is an anti-codon and where is it found?

15. What is a stop codon, and what happens when one is read in the ribosome?

1. What are restriction enzymes?
2. What kind of cells have restriction enzymes, and what is the purpose of these enzymes in the cell?
3. What is a plasmid?
4. How are plasmids used in genetic engineering?
5. Why does human DNA work in a bacterial cell?
6. What is gene therapy?
7. How are small fragments of DNA separated during the DNA fingerprinting process?
8. What benefits are there to inserting a human gene into a bacterium? What possible problems could arise from genetically engineered organisms being released into the wild?

2. If a cell has 8 chromosomes and does meiosis to make sperm cells, how many cells will be made, and how many chromosomes will each cell have?

4. What are homologous chromosomes?

5. What are sister chromatids?

6. What is crossing over, and during which process, (mitosis or meiosis) does it occur?

7. Why is crossing over important?

10. In meiosis, typically four sperm cells are made, but meiosis only makes one large egg cell. Why?