On the trips I took in May I found myself drawn to details, mainly to details in nature. Sure I took photos of big picture subjects too such as Zion Canyon from the trail leading to Hidden Canyon, but I was very drawn to smaller subjects. Now, of course, this may have just been because stopping to photograph flowers, or patterns in the rocks gave me a chance to catch my breath as I climbed up the switchbacks leading to Hidden Canyon, but the interest continued beyond that trail. 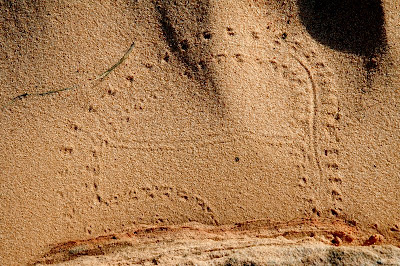 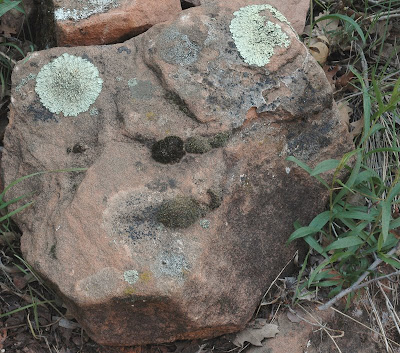 Do you see the face made by the moss and lichen? 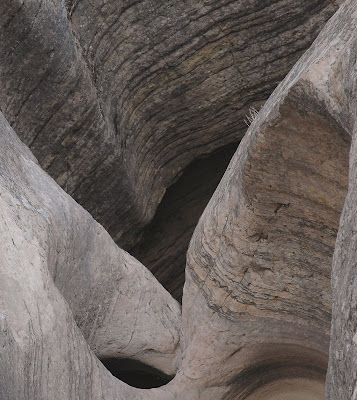 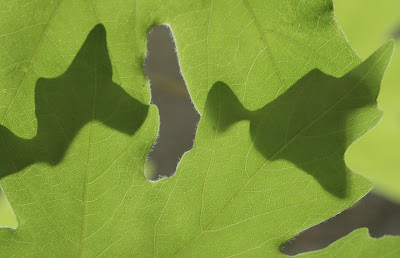 Patterns of light and shadow in leaves along the trail to Hidden Canyon. 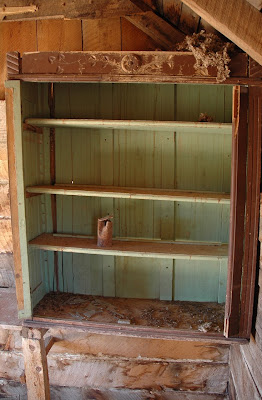 Contents in the cupboard of an old cowboy cabin in Cathedral Valley. 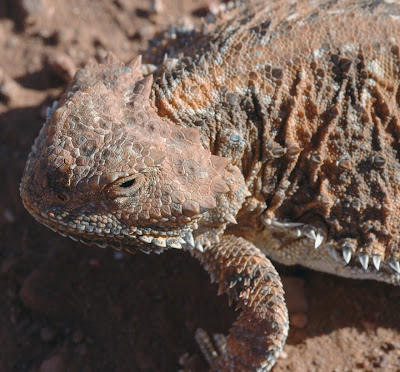 This horned lizard, closely followed by a smaller one,  darted across the dirt road in front of me as I was driving out of Horseshoe Canyon. I stopped to photograph them in the road when suddenly a jeep approached. I am not sure what the people in the jeep thought as I madly chased the lizards around the road to get them out of the way of the approaching car. 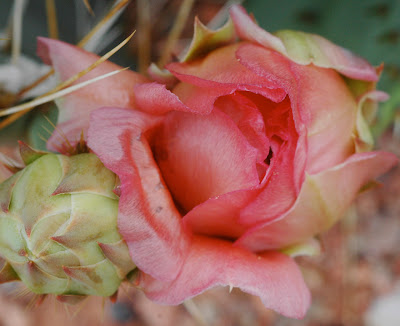 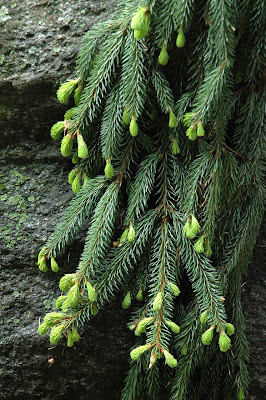 This image of new growth on a conifer was taken at the Foxfire Gardens in Marshfield Wisconsin. This is a private garden on about 80 acres that is owned by a couple who have slowly turned their property into a tranquil, shady retreat. They are very kind to share this with the public at no cost.
Posted by Connie at 6:33 PM 1 comment:

The Great Gallery is a spectacular series of pictographs in Horseshoe Canyon in a very remote part of southern Utah. During the 3 mile walk to the Great Gallery one passes a series of other panels while walking in a canyon with walls of towering sandstone. 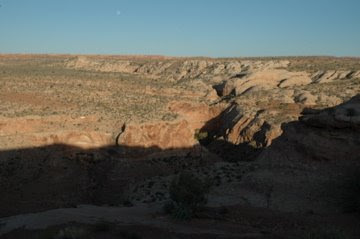 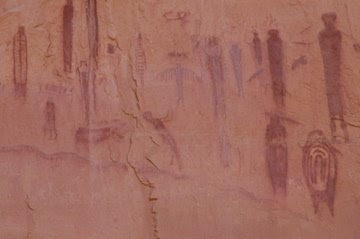 This is the first panel I saw in the canyon, and it has one of my favorite rock art images in it. The figure of the bird/human below being released perhaps by the figure below it, invokes to me the desire to be able to fly. 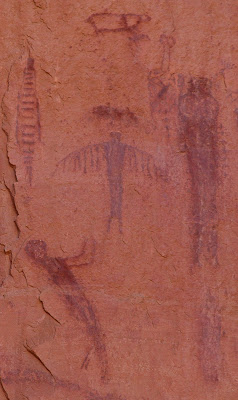 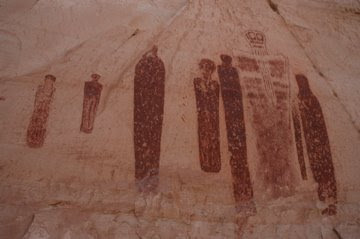 These figures are the most famous of those in the Great Gallery panel. The entire panel is about 100 feet long, and many of the figures are over 6 feet high. They were painted thousands of years ago with mineral based pigments. 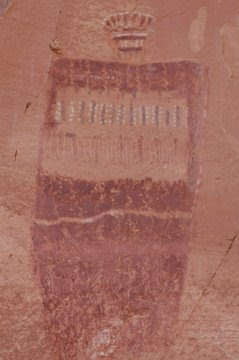 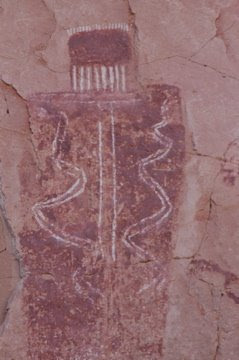 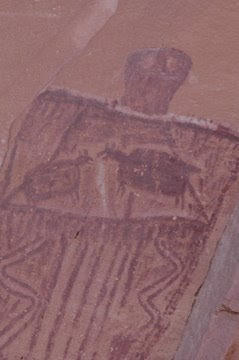 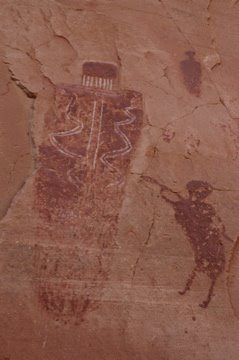 If you plan to do the 6.5 mile round trip walk to see these images, be sure to bring plenty of water. Even in mid May it was in the 90's on the canyon floor. The trail head is accessed by traveling about 30 miles on a dirt road. When I drove it in May it was in fine shape, but after a rain the road can become impassable so check with the rangers at Canyonlands National Park, or with a local BLM office about the condition of the road.
Posted by Connie at 8:04 PM No comments:

Disappointment at the California Coastal Commission

I don't remember being more disappointed in a group of public officials as I was at the Coastal Commission yesterday. The hearing I attended was to review the staff findings based on the Commission's actions on the upper Bolsa Chica wetlands area owned by the Shea Co. The purpose of the hearing was for the commissioners who voted in favor of the project in November
( the prevailing side) to confirm the staff had incorporated the commissions changes made at the November meeting. The only thing to be discussed were the changes made in the staff recommendations by the commission members last November.

However, a 4:1 mitigation for a 4 acre wetland would mean the possibility of a 16 acre mitigation project, perhaps on the site, reducing the area available for the housing project. The representatives of the Shea Co. not only argued that the commission had removed this requirement in November ( in complete disregard for reality) but the commission agreed in a 5-0 vote.

Not only that, but during the hearing on the item, one of Shea's lobbyists handed out a yellow piece of paper to the commissioners with the motions the company wanted, and guess what-Commissioner Secord read motion by motion directly from the paper handed out by Shea's lobbyist.

Things got a little tricky with the last motion which included incorporation of language contained in an addendum handed out by the Shea Co. earlier in the day. The public had not seen this document, so we had no idea of what the last motion actually did. Plus since the document was handed out to the commissioners while they were deliberating on other agenda items, I doubt any of them had time to read the whole thing. Commissoner Wan pointed out inaccuracies in Shea's document she had found in the brief time she had to look over the information, but since she was not on the prevailing side of the vote in November, she could not vote on the motions.

As a member of the public, and a former Mayor, I was terribly disappointed by the way the majority of the commissioners did the bidding of the developer, and ignored the factual information presented by the Bolsa Chica Land Trust and members of the public.

So is this it? Can nothing be done? Well, in 1996 the Coastal Commissioners did the bidding of the Koll Company on a massive plan for construction at Bolsa Chica that violated the Coastal Act, the very law the Commissioners are supposed to uphold. The Bolsa Chica Land Trust sued, and won. That victory not only protected wetlands, and Environmentally Sensitive Habitat Areas at Bolsa Chica, but all coastal wetlands in the State. Maybe it's time to remind the commissioners, that as much as they would like to disregard the rules governing coastal development, there are groups out there who will challenge them when they do so!
Posted by Connie at 8:57 PM 1 comment:

Tanzania in black and white

A friend of mine sent me a link to a photographer's site who has dramatic black and white photos taken in Kenya. This inspired me to play around a little with some of mine. Here's a few photos I took in Tanzania in Dec 05- Jan 06 which I have altered a bit. 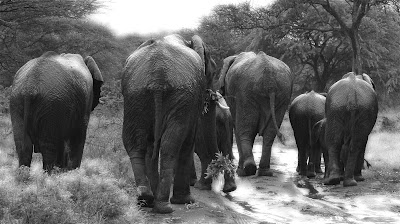 Elephant group on a rainy morning 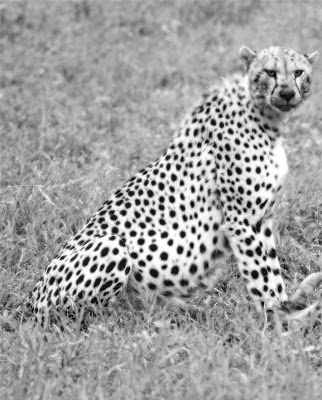 Cheetah with a full stomach 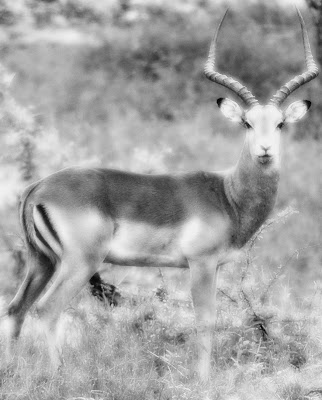 Acacia trees in early morning fog
Posted by Connie at 10:32 AM No comments: